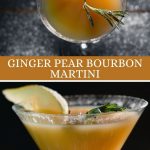 Looking for more elegant martinis? You might also want to try this Blood Orange Martini or this Creamy Caramel Apple Martini.

This Ginger Pear Bourton Martini has a warm bourbon undertone, with a sweet note from the pear nectar and a spicy finish the ginger simple syrup.

You’re going to love it as a holiday cocktail. It’s a crowd pleaser and a fun one to serve because it’s unique. We have a few more great cocktail ideas to check out right here: holiday cocktail recipes.

There is some prep involved in this pear ginger martini, but it’s worth it! The pear ginger simple syrup is so good, and it can be used in other drinks, like a Pear Ginger Moscow Mule (yum!).

If you like bourbon cocktails, I also highly recommend this Amaretto Sour with Bourbon or this Paper Plane Cocktail.

The simple syrup is the time consuming part of this cocktail, but it’s also the star of the show. You can make this as far ahead of time as you like and store it in the refrigerator.

Start by pealing and chopping the pear and ginger. The pear should be cut into 1″ or less squares. For the ginger you only need a 1″ piece. I like to slice it in half or thirds to impart more flavor.

In a small sauce pan, combine the water, honey, pear, cinnamon and ginger. Bring it to a simmer over medium heat. Whisk or stir it until the honey dissolves, so it doesn’t burn on the bottom of the pan.

Then reduce the heat and simmer for about 20 minutes. It will cook down a little bit in that time, so it’s more syrupy, but not thick.

Strain the liquid through a fine mesh strainer and discard the solids. All that delicious pear and ginger flavor will have come out in the syrup. Refrigerate the simple syrup until ready to use. It does need to be chilled before using it, or it will melt the ice in the shaker.

How to Make a Pear Bourbon Cocktail

Along with the bourbon and simple syrup, you’ll also need pear nectar. I like to use pear nectar instead of pear juice, but you can use either – whatever easiest to find.

Combine the bourbon, pear nectar, simple syrup, and lemon juice in a cocktail shaker with ice. Vigorously shake until chilled.

Serve in a martini glass with a slice of pear and a sprig of rosemary or thyme (optional).

What Bourbon to Use

You can use any brand of bourbon you like in this Pear Bourbon Martini. Our favorite is Bulleit Bourbon, but we have a bunch of others in the bar that we use too.

If you don’t have any bourbon and you live in a big city, you can get it delivered with Saucey or Drizly.

You can also serve this cocktail over ice, if you prefer. I think it looks amazing as a martini, but it can be served in a highball or lowball glass over ice for a more festive, afternoon cocktail.

This Ginger Pear Bourbon Martini is fruity and sweet with a kick.

For the Pear Ginger Simple Syrup

You can serve this cocktail over ice in a lowball glass if you'd like.

Try to find pear nectar for this cocktail, but if you can't find it you can use pear juice instead.

As an Amazon Associate and member of other affiliate programs, I earn from qualifying purchases.

Pin it for later!

This website uses cookies to improve your experience while you navigate through the website. Out of these, the cookies that are categorized as necessary are stored on your browser as they are essential for the working of basic functionalities of the website. We also use third-party cookies that help us analyze and understand how you use this website. These cookies will be stored in your browser only with your consent. You also have the option to opt-out of these cookies. But opting out of some of these cookies may affect your browsing experience.
Necessary Always Enabled
Necessary cookies are absolutely essential for the website to function properly. These cookies ensure basic functionalities and security features of the website, anonymously.
Functional
Functional cookies help to perform certain functionalities like sharing the content of the website on social media platforms, collect feedbacks, and other third-party features.
Performance
Performance cookies are used to understand and analyze the key performance indexes of the website which helps in delivering a better user experience for the visitors.
Analytics
Analytical cookies are used to understand how visitors interact with the website. These cookies help provide information on metrics the number of visitors, bounce rate, traffic source, etc.
Advertisement
Advertisement cookies are used to provide visitors with relevant ads and marketing campaigns. These cookies track visitors across websites and collect information to provide customized ads.
Others
Other uncategorized cookies are those that are being analyzed and have not been classified into a category as yet.
SAVE & ACCEPT
Skip to Recipe