Skip to content
This article has links to products that we may make commission from. 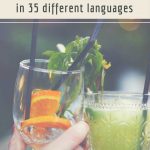 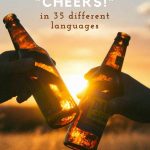 Do you know how to say cheers in Italian? How about Spanish? Check out the infographic below to see all the ways you can use another word for cheers when drinking.

Raising a glass for a toast is a universal experience, but it comes in many different languages. In the United States and the United Kingdom, we say “Cheers!” as a drinking toast. But each country has a different way to say cheers, spoken in their own language.

Before you travel somewhere new, why not learn a new way to say cheers in the language of your destination? You’ll fit right in at the table and maybe even make a few new friends.

We’ve compiled 35 different ways to say cheers in a fun infographic (below), so you always know how to say it in other languages.

What Does Cheers Actually Mean?

Saying “cheers” and clinking glasses is one of those time-honored traditions that we do without thinking. You may be wondering why we do it in the first place. The word or phrase used in different languages for “Cheers” has various translations, but they all carry the same meaning.

We say “Cheers!” as we clink glasses before taking a drink as a form of salutation – a gesture, or toast, meaning “to health and happiness”. While there is no definite proof of the origin of this phrase and gesture, it is said to have been an ancient tradition.

The general consensus is that it began as a way of honoring someone, just as a toast still does, but that the ceremony of saying an elaborate toast turned into a shortened for of clicking glasses and wishing your fellow drinkers good cheer!

How to Say Cheers in 35 Different Languages

We’ve done a lot of traveling – perhaps you have too – and we’re always having to scramble to look up the translation for cheers as we grab our first beer or cocktail in a different country. Sure, we could just say “cheers” and no one would care, but it’s more fun to join the others and say it like you mean it.

For your convenience (and ours), we’ve put together this fun infographic with the phrase you should use to say cheers in 35 different countries.

Notice that many countries say it the same way. Cheers in Spanish is Salud, cheers in Italian is Salute, and in Portugal it’s Saude. Skål, meaning health, is used in at least four different countries.

Now when you’re drinking in Italy or Spain, you’ll know what to say.

How to Say Cheers in Many Languages (Infographic)

If you’d like to embed this infographic on your own site, you may do so with proper attribution to https://savoredsips.com.

8 thoughts on “Drinking Toasts: How to Say Cheers in 35 Different Languages”

This site uses cookies. By continuing to browse the site you are agreeing to our use of cookies. Find out more.