No matter whether you are making drip coffee, a latte, or cold brew, you can dress it up by using evaporated milk in place of regular milk or creamer.

Milk evaporation is concentrated and has about 60 percent less water than regular milk. As it’s thicker and more concentrated than milk, it adds a richness to a cup of coffee that regular milk doesn’t.

» See how to make a perfect iced mocha or creme brulee latte.

What is Evaporated Milk?

Evaporated milk is a shelf-stable reduced milk that contains about twice as much lactose as whole milk and 60 percent less water.

It’s made by concentrating regular milk. The process involves heat-treating milk to stabilize it and rid if of bacteria. This makes it possible to store evaporated milk in a can on the shelf, rather than in the refrigerator.

It is then added to an evaporator where it is reduced to the desired level. The reduced milk is then homogenized and cooled, then treated with stabilization salts and fortified with vitamin D. Low-fat and fat-free versions also have added vitamin A.

Although it’s made from real milk, it has a silky, syrupy texture that is about the same thickness as cream. And just like milk, you can buy either whole, skim, or low-fat evaporated milk.

Why Use Evaporated Milk for Coffee?

The most compelling reason to use evaporated milk in your coffee is that it is silky and creamy, so it adds a richness to coffee that’s hard to achieve any other way. It makes a great cup of coffee.

If you do a lot of traveling or camping, you might also find it to be more convenient to bring canned evaporated milk along in place of perishable milk.

You might think that reduced calories would be a reason, but as it turns out cream and evaporated milk both contain about the same calories. There are 170 calories in half cup of evaporated milk, and 172.5 in heavy cream.

What is the Difference Between Evaporated Milk & Condensed Milk

Both are similar in that they are reduced whole milk. The biggest difference is that condensed milk contains sugar, while evaporated milk does not.

There is a large volume of sugar in condensed milk, which makes it ideal for making things like Instant Pot dulce de leche. If you want a sugar free version, you’d have to make your own at home using a sugar substitute.

How to Use Evaporated Milk for Coffee

Is evaporated milk a good substitute for coffee creamer?

Yes, evaporated milk makes a good substitute for milk, cream, or coffee creamer. It has a very similar taste profile. The only difference is that evaporate milk doesn’t contain sugar or flavoring, so you’ll still have to add sugar and/or flavored syrup, if you want.

Can you whip evaporated milk?

Yes, you can whip evaporated milk, just like you could cream. However, similarly, the milk, beater and bowl should all be very cold before you begin so it will whip up properly. Chilling the milk also improves the texture and amount of whipped cream you’ll get.

How do you store evaporated milk?

Another way to store leftover evaporated milk is to make ice cubes out of it, like we do coffee ice cubes. Once frozen, you can remove the cubes from the tray and put them in a container or bag in the freezer. Then you can just add as many as you like to your coffee. They’ll keep well frozen for a few month.

How to Make Coffee Ice Cubes 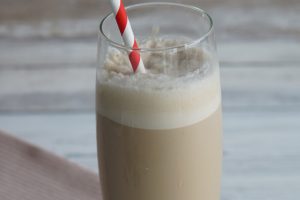 How to Make the Perfect Coffee

20 Different Types of Coffee Drinks From Around the World